The entrepreneurial ecosystem is at various stages of development across emerging markets worldwide and especially Africa. However, there is one statistic common to almost all geographies: the notable lack of women entrepreneurs, ecosystem builders, and investors –  writes Shruti Chandrasekhar, Senior Investment Officer, IFC Venture Capital.

IFC analyzed venture funding in emerging markets over a five-year period, from 2012 to 2017.  We found that on average, only 9 percent of companies funded were women-led startups[1].  For Africa, these numbers look even more bleak: Venture capital funding for startups across the continent in 2017 reached an all-time high of more than $500 million –  a 53 percent year-on-year increase[2].  Yet, only $30 million[3] of this amount went to companies with female co-founders – a mere 5.3 percent.

The number of women on the fundraising side of the equation is equally low: globally, around 13 percent of senior partners in venture capital firms are women, while in Africa the percentage hovers at 10 percent. 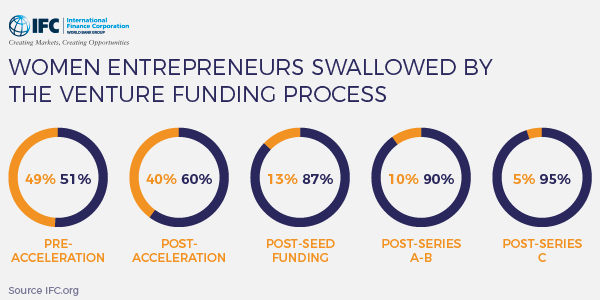 Why do these problems exist?
Our conversations with women in the ecosystem highlight many reasons.  Some suggest women should learn the “language of men”. This sounds simple, silly, and unnecessary, but it is a sentiment that resonates with many women entrepreneurs .  Other players highlight the discomfort of pitching to a large audience as another barrier that potentially deprives them of that initial check that can make a monumental difference in their company’s growth.

Women also indicate that they are more inclined to make realistic plans rather than depicting grand visions and lofty goals; hence, when investors discount entrepreneurs’ expectations of growth, women are disproportionately penalized.

Technology is not the only sector that shows disproportionate growth: a sizeable number of women-led businesses cater to market gaps in sectors where technology is less of a factor. Because venture funds heavily favor tech companies, these women entrepreneurs often lose out on financing.

According to research conducted by the Kaufman Foundation, nearly 50 percent of women entrepreneurs state that one of the biggest challenges facing their business is the lack of available mentors.  Given that mentors are usually former entrepreneurs, the problem self-perpetuates, creating a vicious cycle. The imbalance only continues to grow.

What can we do to address the problem?
Multiple interventions are needed to change this inherent and self-perpetuating imbalance. Interventions at every stage of the financing chain would provide support for women-led companies as they transition from one stage to the next, and could increase the women influencing the funding side of the equation.

Our goal at IFC is to turn this vicious cycle into a virtuous cycle. We believe this can be achieved through targeted interventions at the firm and sector levels across emerging markets, and by leveraging players from all stages of the entrepreneurial ecosystem.  Women-led companies are better positioned to understand female customers.  And female customers influence 85 percent of consumer decisions globally — ranging from 93 percent of food and beverage choices to 66 percent of ICT purchases[7]. For Africa, this translates into $785 billion of annual spending that is controlled by women[8] and that could be better served by women-run enterprises.  Investing in women is, quite simply, sound business.  Let’s better serve this market, capture value, and work together to make these changes a reality.

Sources
1 Based on Crunchbase data from 2012 to 2017
2. Partech https://qz.com/1211233/how-much-did-african-startups-raise-in-2017-partech-disrupt-africa/
3. Based on Crunchbase data 2012-2017.
4. The Entrepreneurship Database Program at Emory University – 2016 Year-End Data Summary (Released June 2017).
5. Based on Crunchbase data from 2012 to 2017.
6. Diana project.
7. 85% of consumption decisions are controlled by women, varying across sector, ranging from 93% of Food & Beverage purchases to 66% of ICT purchases (Source: Greenfield Online for Arnold’s Women’s Insight Team).
8 Based on the Global Consumption Database by the World Bank which estimates consumption across Africa at $923B as of the latest data set (2010).