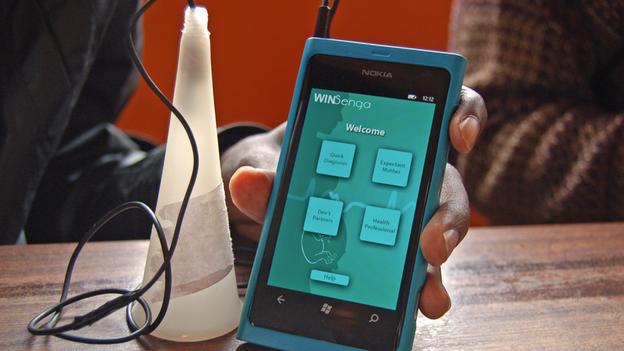 Each year over eight million babies die during delivery or in the first week of life in developing countries according to UN. Lives can be saved through access to skilled care during pregnancy and childbirth, however this is a challenge in Africa where the number of trained medical personnel is quite low.

The Pinard horn, which was invented by a French doctor who it is named after is widely used by midwives. It can detect the age, position, heart rate and the health of a foetus if used by an experienced person. However, it takes quite sometime to understand how it works well.

This is the instrument that Aaron Tushabe, together with his two friends encountered during a trip to the maternity ward of a hospital in Kampala, Uganda’s capital city. Despite training on how to use, Tushabe says he was unable to hear anything. These factors prompted the three to build a device that Joshua Okello, one of the the three, refers to as an improvement of the Pinard horn. They called their innovation WinSenga.

It consists of a trumpet, with a highly sensitive microphone inside. Just like the regular horn, it is placed on the women’s abdomen. It is connected to an app that runs on a windows based phone. The app analyzes the impulses that have been picked up by the system.

In developing this technology, the team was advised by Davis Musinguzi, a medic and UNICEF advisor. Since launching in 2012, the team which has grown from the initial three software developers, Joshua Okello, Aaron Tushabe and Josiah Kavuma into a technology startup called Cypher256 with a staff of seven.

The team has received a number of accolades. These include being the first ever winner of Microsoft Imagine Cup grant which they won in December 2012. They showcased at the Social Innovation Summit, also in December 2012. In March, this year, they spoke at the WeDay Conference in California and were the Top Ten Finalists of the Innovation Prize for Africa in April this year.

They have formed notable partnerships with Microsoft, Makerere University, Uganda’s Ministry of Health and Mulago Hospital School of Public Health and plan to expand across Africa to help save as many lives as possible.