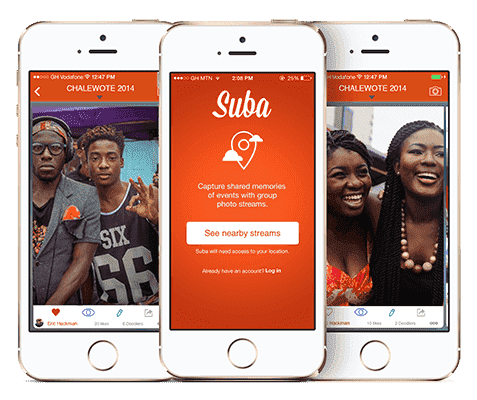 Two African developers based in Ghana have launched Suba, an events-based iOS and Android mobile app that allows everyone at fun social gatherings to see and share photos together in one central photo stream. Suba goes beyond the constraints of a Friends List common to other social platforms, and allows event attendees to see, save, and share everyone’s photos – even the photos of people they aren’t already connected to.

“We came up with the concept for Suba after attending a friend’s wedding. Everyone was taking pictures, and we realized that we’d never have a chance to see them,” says Nelson Klutse, CEO of Suba tells Appsafrica. “Our ultimate ambition is to be globally synonymous with event experiences. Wherever there’s an event happening, it should be known that Suba is where you can find all of the photos taken at the event.”

The name Suba reflects the “flow” of  the app’s novel photo viewing experience. It’s a riff on the the word “nsuba,” which means “stream” in Twi, a local language of Ghana. Suba’s unique features help event attendees relive the best moments from social gatherings in a fun, exciting way:

Suba was developed by co-founders Nelson Klutse and Eric Hackman, and is based at the Meltwater Entrepreneurial School of Technology (MEST) Incubator, the former home of Saya, the African mobile messaging service that was recently acquired by the US-based mobile apps giant Kirusa.

“People are often surprised that we’re developers from Africa. The common narrative of the continent is usually one of poverty or aid, so the idea that something as innovative as Suba could be created here is a contrast to many people’s misconceptions of Africa,” says Eric Hackman, co-founder of Suba.

To expand into international markets, Suba is partnering with event producers in cities such as New York, Rio de Janeiro, Paris, and Mumbai to introduce the app to cultural influencers with the ultimate goal of making Suba globally synonymous with shared event experiences.

Suba is currently available as a free app in the iOS App Store and Google Play Store. Available for download here also