An interesting piece written by Leo Mirani at Quartz details how ISP’s in Ghana are now being decimated by mobile as more and more Ghanians use mobile web. Ultimately to succeed online in Ghana you must tackle the mobile first and many early internet cafes are finding this out the hard way and closing rapidly. 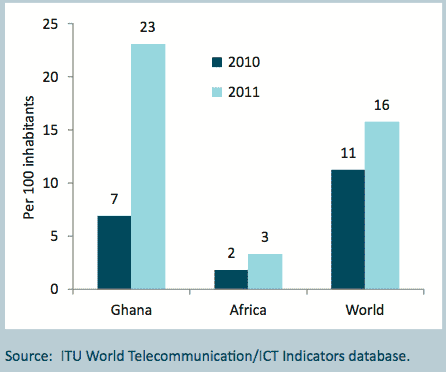 For a time, running an ISP was a trendy thing. Some 150 companies presently have a license, and about 20 are operational. But many of them are finding it hard to stay afloat. Even cyber cafés, many of which are run by ISPs, are beginning to shut down. Ghana’s biggest, which had 100 connections and its own satellite connection, closed in February.

Mobile penetration over 100%
In November, mobile penetration surpassed 100%, and there is still plenty of room to grow. Estimates put the number of people with cellphones at around 16 million, well short of Ghana’s 25 million citizens. (Plus, it is common in Ghana, as in many countries, for some people to have more than one SIM.)

The number of mobile broadband users will increase as some of Africa’s biggest operators, including MTN, Vodafone, and Airtel, fight it out for market share. Already, mobile broadband prices are among the lowest in Africa.