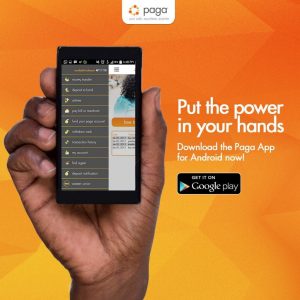 With the majority of Africans unbanked, mobile money and payments are critical and one of the biggest hurdles for the growth of services across Africa.  Adoption has been slow in Nigeria, but this maybe about to change for Paga.

Mobile money adoption in Kenya flourished with a dominant MNO led rollout by Safaricom, Nigeria has failed to establish a viable mobile money space. This is because banks have not permitted a single operator to launch a single service capable of reaching critical mass according to a MEF report. As a result, multiple services have launched and none has achieved any kind of network effect and gain mass adoption.

Paga pivoted to provide a more all-encompassing digital payments platform. Thus, its users can send and receive cash via mobile and redeem it through agents. But business owners can also integrate Paga on websites similar to PayPal. This is a big opportunity in a market where e-payment is a still a hurdle for tech companies in Nigeria. Today, the company has 9000 agents and has handled transactions worth over one billion dollars via 17 million transactions from 3.4 million registered users.

That success has been rewarded with a $13 million series B round led by Adlevo Capital, Omidyar Network, Acumen Fund, Capricorn Investment Group and Goodwell West Africa. Tayo Oviosu, founder of Paga, said: “Through our agent network today, we already offer more physical service points than all the bank branches in Nigeria put together, so we are actively working on partnerships with banks to offer our agent network for use by their
customers.”

With this new investment, Paga has been vindicated for its tireless efforts since 2009 to introduce and educate the Nigerian market on mobile money and payments and drive financial inclusion. Maybe now Paga can capitalise on what they started in Nigeria before their global competitors arrive in force.