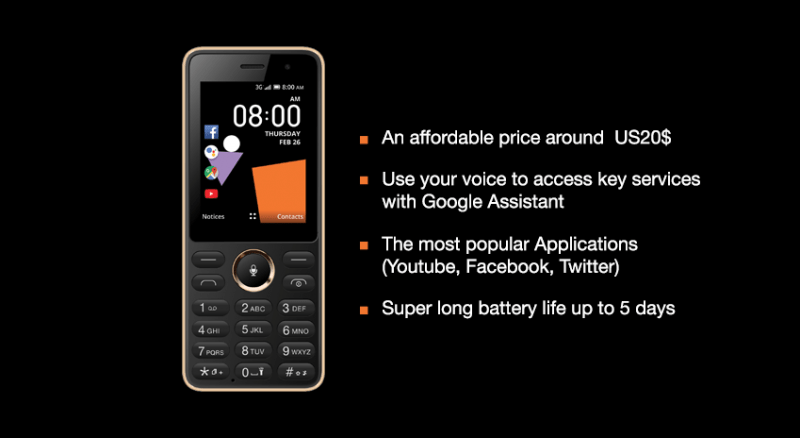 Orange has announced a partnership at Mobile World Congress, with KaiOS Technologies and UNISOC to launch a US$20 device with voice recognition aimed at African mobile users.

An affordable 3G smart feature phone
Beginning April 2019, Orange customers in Mali, Burkina Faso and Côte d’Ivoire will have access to a new category of smart feature phones powered by KaiOS, the operating system from KaiOS Technologies. The device will be launched in 16 countries in Africa and the Middle-East.

Sanza will be commercialised with a dedicated offer (voice/text/data) starting around $US 20 (depending of the country), that will help customers to optimise their budget.

Advanced functionalities for Africans
Thanks to the Google Assistant, Sanza will help overcome language and literacy challenges, as our customers can access information and applications on the device easily, just with their voice, and without having to type. The Google Assistant understands multiple French and English accents, with more languages to come later this year. The phone menu is available in Arabic, Swahili, Portuguese, English and French.

This new phone will also give access to applications such as Twitter, Facebook, YouTube, Google Search and Google Maps, as well as Orange Money, the flagship mobile-based money transfer and financial services offer and My Orange, the application to monitor your mobile consumption, among other things.

For Alioune Ndiaye, CEO of Orange Middle East and Africa:”Sanza is a concrete proof of the capacity of Orange to be a key player of digital inclusion in Africa and the Middle-East. With its access to internet with the voice and its attractive price around US $20, I have the conviction that this 3G phone and soon 4G, is a powerful lever to develop the access to internet for all in Africa”.

For Gérard Lokossou, CEO of Orange Democratic Republic of Congo: “The Smartphone penetration rate in DRC is quite low, 30 per cent versus the average of 50 per cent for the Continent. The established mobile payment services via Orange Money, the launch of 4G+ in 2018 and our engagement to extend 3G coverage to the whole country are all contributing to boost the smartphone penetration rate in DRC. The next commercialisation of the Sanza phone at an affordable price demonstrates our strategy for the democratisation of Internet access in the country.”

Sebastien Codeville, CEO of KaiOS Technologies, said: “Our mission is to help close the digital divide by bringing mobile connectivity to the billions of people without internet in emerging markets, as well as providing those in established markets with an alternative to smartphones. The Sanza by Orange marks an important milestone in fulfilling this mission, as its bound to be successful in Africa with its attractive price point, great features, and the strong presence of Orange in the region.”

Devices with KaiOS will soon be in the hands of millions of new users across the African continent, providing African developers opportunities or generate revenue through app sales, subscriptions, and advertising options.

Sanza has the simplicity of a feature phone powered by the UNISOC SC7731EF chipset platform with a long-lasting battery life up to 5 days, 3G+, Torch, Wi-Fi and Bluetooth, combined with advanced smartphone-like functionalities.