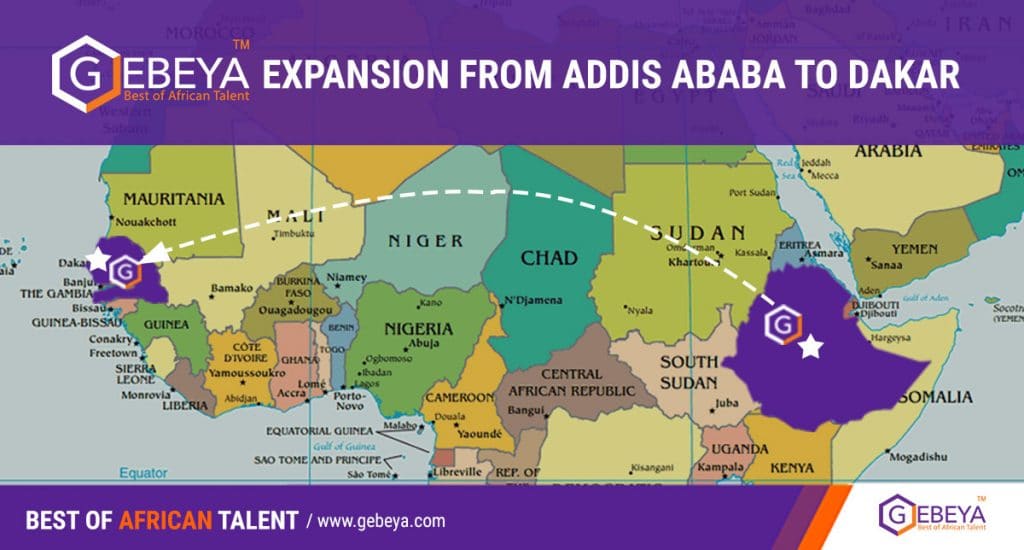 Gebeya has announced its plan of expansion into Senegal in response to the growing tech potential of West Africa. The company was born with a Pan African vision of a greater future inclusive of the African youth. It has remained committed to this mission for the past three years by maintaining a strong presence in East Africa.

Despite the buzz surrounding the region’s potential for technological growth, over the years adverse factors have caused Francophone Africa to lag behind in the tech scene. Several indicators show insufficient funding and inadequate skilled human capital to be two of the contributing factors. Contrary to its Anglophone counterpart, Francophone Africa is lacking in investment and the shortage of proficient tech workforce contributes to an almost negligible technological development of most West African countries. As a result, digital entrepreneurs are discouraged from building upon inventive ideas while software engineers veer into other career avenues. However, with programs like L’Afrique Excelle and a growing number of progressive incubators like CTIC Dakar, Jokkolabs as well as CIPMEN, the tide seems to finally be turning.

According to research by the GSMA Ecosystem Accelerator, Africa’s technological transformation is gaining momentum with a total of 442 active tech hubs operating across the continent including incubators, accelerators, co-working spaces and other innovation centers. Out of 442 of these tech hubs, 45% of them are found in 5 countries (South Africa, Nigeria, Kenya, Egypt, Morocco) while 13% of the tech hubs are partnering with mobile operators for better performance and opportunities. Although Anglophone Africa has for many years taken center stage in the tech scene, Francophone Africa is now ripe for technological opportunities with Senegal being one of the nascent West African countries.

“Senegal was the first country in Africa where Coders4Africa (C4A) established itself. We could see even then the potential that the country possessed.” said Amadou Daffe, CEO and Co-founder of Gebeya. He went on to add, “Currently, Gebeya has a network of 1000+ software developers amassed in the francophone region under C4A. As more and more clients look into Senegal in search of tech talents, it is imperative that the available resources are leveraged to ramp up on capacity fairly quickly. Our biggest client Orange Sonatel has on boarded Gebeya engineers a couple months ago with plans to add more throughout the year. We graduated the first training cohort of engineers that they sponsored 2 months ago and it was just a month ago that we started a second cohort.”

Senegal’s landscape for tech startup companies is on the rise with the construction of the Diamniadio International Industrial Platform as well as a recorded 13 tech hubs already set up as of 2018. With more than 60% of its population reported to be under the age of 25, the country has an overflowing pool of young people who possess the capacity to contribute to local economies, global markets and the future of Africa.

Gebeya looks to take an active role in the development of these youth. The expansion into Senegal will allow the company to nurture tech talents and work closely with local and international clients to create job opportunities for aspiring software engineers. By expanding the community of innovative tech professionals who will assume a vital position in galvanizing the tech startup scene, Gebeya aims to steer Francophone Africa to the front lines of Africa’s Digital Renaissance.